Amanda  is a Team USA Midfielder, Professional player for Athletes Unlimited and former USC All-American. She is currently in her fourth year as the Associate Head Coach at Hofstra, serving as the Defensive Coordinator and the Draw coach. She spent the 2018 college season as an assistant coach at the University of Southern California. Johansen served as the offensive coordinator for USC and help lead a unit that averaged 12 goals per game. Prior to working at USC, Johansen spent a season as a graduate assistant coach at Mount St. Mary’s. She served as the program’s defensive coordinator.

Amanda was a decorated student-athlete at USC as she compiled 194 points on 134 goals and 60 assists during her 77-game career with the Women of Troy. She also had 258 draw controls. The 2013 Mountain Pacific Sports Federation Rookie of the Year and a Intercollegiate Women’s Lacrosse Coaches Association All-American as a senior, she was a team captain in 2015 and 2016 and was an integral part of USC’s first-ever NCAA Tournament appearance and run to the NCAA Quarterfinals as a senior in 2016.

Amanda has played professionally for 5 years, two seasons with the Baltimore Ride of the United Women’s Lacrosse League and two for the Baltimore Brave of the Women’s Professional Lacrosse League. In the summer of 2019 she captured the WPLL title with the Brave and was also named to the All-Star team for the second year in a row. This past summer, Johansen played in the pro debut of Athletes Unlimited as a midfielder. In addition, Johansen is a member of the U.S. National Team.

Johansen, who graduated from USC in 2016, earned her bachelor’s degree in business administration and also received a minor in sports media studies. She earned her master’s degree in sports management from Mount St. Mary’s in 2017 and a Masters Degree in Sports Science from Hofstra University in 2019. She also is a certified Sports Nutritionist. 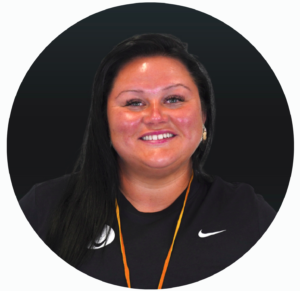 A native of New York, Amber is a decorated goalkeeper at both the collegiate and professional ranks.  She played for Syracuse University and while there led the Big East in Saves in 2007 while also garnering Most Outstanding Player at the conference championships that season.  She also is 2nd all-time for the Orange in single-season Saves.

After college, Amber led the Haudenosunee Nationals to a first-place finish int the 2019 PanAm Lacrosse World Championship Qualifier.  She has won three gold medals in her career: two in the Ontario Women’s Box Lacrosse League and one for the Six Nations Sniper squad in the Women’s Arena Lacrosse League.