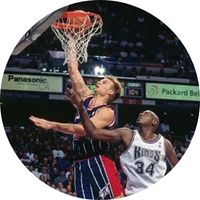 Armed with a decorated amateur and professional career, Pete joins Area Scouts as the National Director of Defense & Rebounding for Men’s Basketball.

Originally from Sumter, SC, Pete was a decorated high school athlete, being named a McDonald’s and Parade All-American while playing for Tuscaloosa Academy (AL).  Pete chose the University of North Carolina to continue his playing career, starting for three seasons as a power forward under legendary coach Dean Smith.  He garnered All-ACC and All-ACC Tournament honors his senior season while averaging 12 points and 7 rebounds per game, helping the Tar Heels reach the Final Four.  UNC won two ACC conference titles during his time there.

Following his senior season, Pete was selected in the 1st Round of the NBA Draft by the Sacramento Kings where he played for three seasons.  His tenacity and defensive prowess kept him a mainstay in the league for 9 seasons, including two for the Houston Rockets where he won an NBA Championship (1994-1995).  He also spent a season overseas playing for the professional Italian Illy Caffe Trieste squad.

After his playing career, he became an educator and coach, founding the Clutch City Basketball Academy in Sacramento, CA where he began his pro career and made his home.